Located in the Heart of the Idaho Cobalt Belt

Idaho Champion owns 622 staked mining claims covering approximately 6,871 hectares (16,975 acres) in northern Idaho, in four claim blocks, referred to as the Victory Project, the Fairway Project, the Twin Peaks Project and the Ulysses Project. Collectively, the Idaho cobalt properties are also referred to herein as the “Idaho Cobalt Project”. Historical data indicates that the area is prospective for cobalt. Jervois Global commissioned the country’s first primary cobalt mine in the district in the fall of 2022. 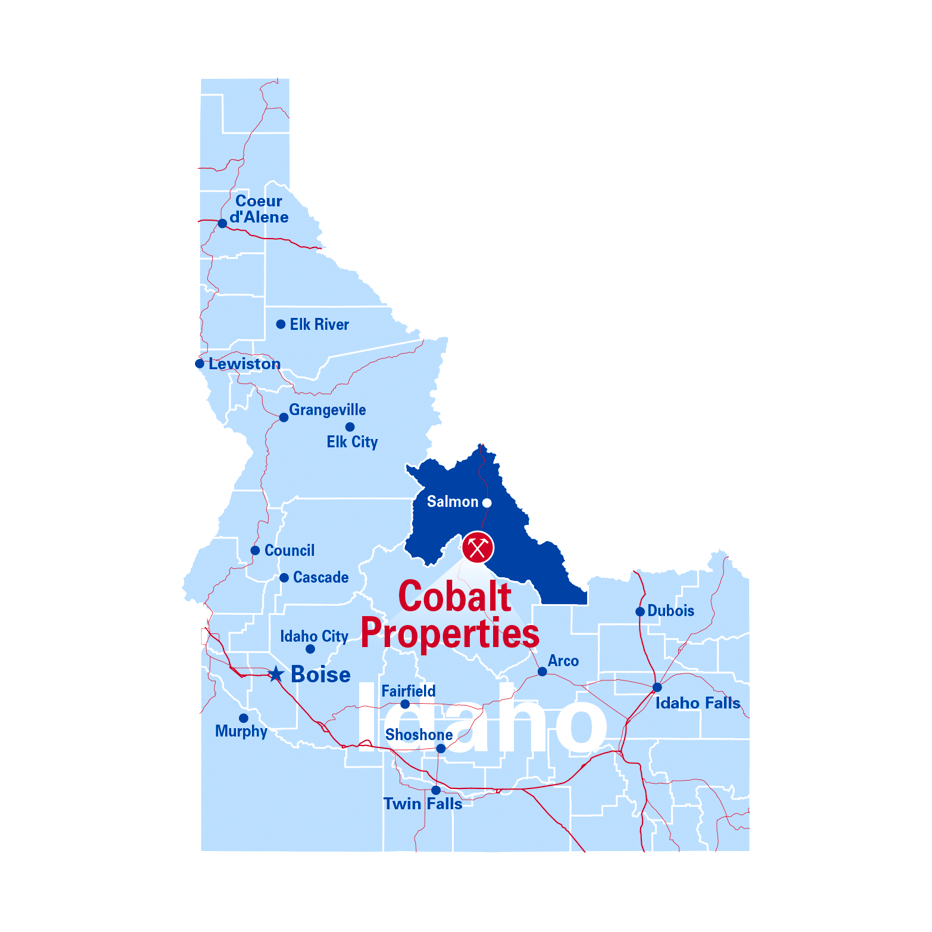 The Victory project is situated in east-central Idaho, approximately 25.8 miles west of the city of Salmon. This city has a population of 3,000 people and is the county seat for Lemhi County. It is a center for most of the transportation, ranching, logging and mining industry in this area. It also has a small airport, with daily air service to Boise, the capital of the State of Idaho. The nearest railhead is located at Dubois, some 100 miles to the southeast. Vehicle access is via a series of well-maintained gravel roads which lead west from a point on Highway 93, six miles south of Salmon. The gravel road leading to the Blackbird Mine, which is north of the Victory project is kept drivable year round. These roads are passable for most of the snow-free months of the year. The nearest electric lines are located at the minesite.

Copper mineralization in the Blackbird Creek area was discovered in 1892, and the area was soon explored as both a copper and gold prospect. The area was first mined by Union Carbide at the Haynes-Stellite Mine located south of the present FCC claim block, during World War I. Union Carbide mined approximately 4,000 tons of cobalt-bearing ore before ceasing operations, reportedly due to excessive mining costs. From 1938 to 1941, the Uncle Sam Mining and Milling Company operated a mine at the south end of the present Blackbird mine and reportedly mined about 3,600 tons of ore

The Twin Peaks Project is situated in Lemhi County, approximately 17.9 miles south-southwest of the city of Salmon. Vehicle access is via Highway 93, twenty-two miles south of Salmon, to the Iron Creek bridge on the Salmon River. From there, one proceeds northwest along the good quality Iron Creek Road to the mouth of Badger Creek, near the edge of the property. A walk of 2.5 miles is required to reach the center of the property. Access to the northern portion of the property is via the Degan Mountain Road, which is located further up Iron Creek. The property lies between 5,500 feet, at the mouth of Badger Creek, and 6,700 feet elevation, in thenorthwest. The claims cover the south facing, sage brush covered eastern slopes of Degan Mountain. The climate is typified by hot summers and cool to cold winters. Snowfall provides most of the 12 inches of precipitation received by the basin. Several of the small springs on the flank of Degan Mountain keep Badger Creek flowing year-round. The surface exploration season extends from March through November.

The outcrops of the deposits were discovered and located in 1927 by Charles Kapp. Mr. Kapp, a cattle rancher nearby, located eight lode claims and 2 millsites. A zone of mineralization, bearing galena and some malachite, parallel to flat dipping (20°) beds, was explored by an inclined winze 120 feet, slope distance. In 1944, the claims were taken under lease by Percy Goodwin of Salmon. A makeshift mill was constructed to concentrate the ore from the inclined winze. Due to financial difficulties, the mill was not operated, and no new development was done.

The Twin Peaks Mine area is currently held 100% by Idaho Champion.

The SC Claims are located one km north of eCobalt’s Blackpine copper-cobalt Project. The SC Project is host to stratiform sulphide mineralization found in massive sections which typically contain pyrite and chalcopyrite. Aside from the copper rich strata, there are several narrower cobalt-gold rich arsenopyritebearing beds present in the copper mineralized section. A non-43-101 compliant historical reserve 340,000 tons grading 3.5% copper was delineated in the 1960’s. The SC Claims are underlain by similar geology to that of the Black Pine Project. Ridge and spur sampling is planned for the SC Project. The climate is typified by warm summers and cool to cold winters. Conditions vary from semi-arid in the lower elevations to humid-continental in the higher altitudes. Mean daily temperatures range from 0° in December to 90°F in July. The precipitation varies from 14 to 20 inches, with the average snow packs in the range of several feet. The surface exploration season extends from March through November.

Mineralization was first discovered in the area of the present Black Pine property in the late 1800s, with early exploration focused on gold and copper. The first property, a block of three claims and one fraction, was staked in this area during 1905. In 1992, Formation Capital (“Formation”) optioned the property and added additional claims. Since that time, Formation has completed surface geological mapping, soil geochemistry, trenching and drilling programs. The drilling was done during 1993 and 1994 and included 75 diamond drill holes, totaling 9,791 meters (32,122 feet), and 100 reverse circulation holes which totaled 4,763 meters (15,625 feet). In 1996, Formation completed 18 diamond drill holes, totaling 3,087 meters (10,129 feet), on the property. This included 7 holes on the Regina zone, 2 holes at the Troll zone and 9 holes on the Trench zone. A limited amount of geologic mapping on the Troll zone was also completed. This was the first year that Formation’s primary exploration target was cobalt mineralization, not copper.

The IP and GS Claims are 2 km north of the Ulysses Mine, a historical gold/silver producer located in the Yellowjacket Formation which is associated with Cobalt mineralization in the region. Two cobalt occurrences have already been identified south of the Ulysses Project, which attest to the prospective nature of this area. The Yellowjacket Formation in this area is located outside of the prolific “Idaho Cobalt Belt” but is interpreted to have similar geological potential to host cobalt-copper-gold mineralization.The Ulysses project consists of 100 IP and GS unpatented lode mining claims located in east-central Idaho, approximately 30 road miles northwest of the town of Salmon. The property covers 809 hectares (2,000 acres). The IP & GS claims were staked over an area of extensive drill roads that were drilled by Teck.

The dominant structures in the area are north to northwest trending faults and shear zones. One of these, the White Ledge Shear, which apparently, displays substantial strike-slip movement (Nash, 1989), marks the western extent of the mafic strata in the area of the Sunshine project. Folding is reportedly common, locally. 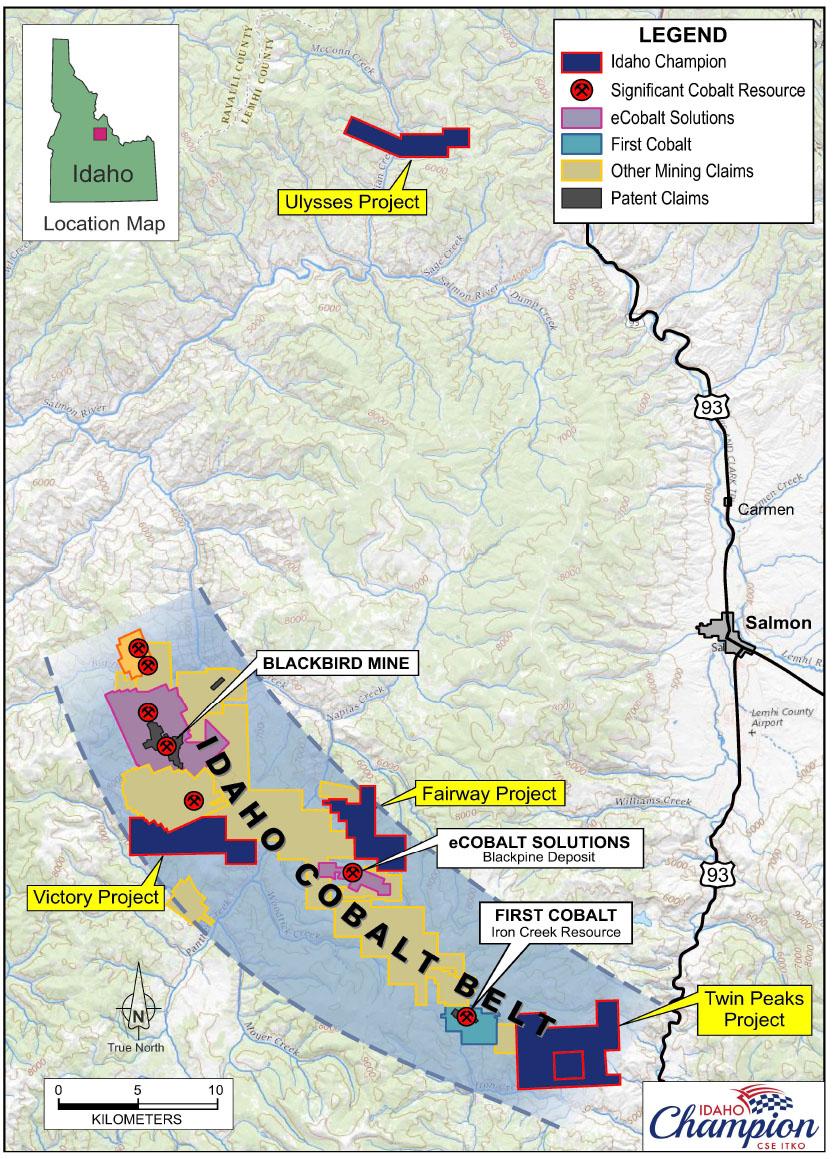